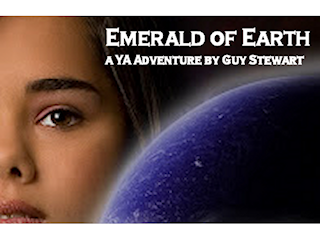 Almost-thirteen Emerald Marcillon lives with her parents, who have dug up evidence of aliens in Chicxilub Crater in Yucatan, they have found artifacts that point to a long-ago alien war. An alien artificial intelligence called Inamma has survived that war. It tries to steal the artifacts that when assembled, can destroy all of Humanity. But it can’t find them and kills Emerald’s parents. Emerald escapes and is taken into Earth orbit to the SOLAR EXPLORER. Inamma follows Emerald into space, and the ship’s captain, who is also her great-aunt, tries to hide her from Inamma. Emerald holds the key to the artifacts. Emerald is not the best at making friends, but manages to make a few on SOLAR EXPLORER. When her friends and crew members find what Inamma is, they fight together to protect the artifacts.

(If you like what you see, share this link with a friend! This is where the story starts -- Season 1, Episode 1 is at the bottom: (https://stupefyingstories.blogspot.com/search/label/YA%20SciFi%20EMERALD%20OF%20EARTH%20Serial?updated-max=2022-01-28T05:00:00-06:00&max-results=20&start=18&by-date=false)
“The purpose is to make sugar crystals.” She waved at one of the trays. “This is teache – raw sugar syrup. When this one is full, we move it across the room and pour it into one of the pans there,” she pointed to a shallow, empty pan. “It cools off and crystallizes into raw sugar.”

“A robot comes in every night and empties the raw sugar pans. We start all over again the next morning.”

Ayaka smirked, turned, grabbed a hose and handed it to Emerald, “And clean out the pans. The newbie always does it.”

Izegbe hesitated and added, “At least the first time.”

Ayaka shot her a dirty look.

Izegbe ignored her and said, “You can start with the crystallizing pans. When it comes time to dump the first into the second, I’ll call you.”

Izegbe and Ayaka left Emerald to the shallow pan, climbing up the ladder and stirring the largest vat with what looked like a canoe paddle.

Emerald turned back to her pan. The surface was crusted with dark brown crystals. She knelt down and scratched at them. They were hard as rock. She twitched on the hose and pulled the trigger nozzle. Nothing happened.

With a sigh, she stood up and followed the hose to a wall where she turned on a spigot. Back at the crystallization pans, she noticed a wide grate in the floor. She set to work cleaning out the crystals with water and dumping the heavy pans so that the dirty water ran into the grate.

By the time she was done, Izegbe called her to help dump the first batch of boiling hot juice into a clean second pan. All three girls lifted the pan with thick gloves, face shields and heavy aprons in place, and grunting, poured the liquid carefully into the cooling pans. Together.

Three hours later, all four pans were boiling, steam swirling around the house, stiflingly hot. Emerald and others he girls stepped to the door by rotation, going back to the pans after a few moments of fresh air. The stench of boiled plants permeated everything.

Izegbe stirred the first and deepest pan with a long, shovel-like paddle, Ayaka the second and Emerald the third and fourth because they were shallow and easy to stir.

After a while, Ayaka shouted over the roar of the furnaces under the pans, “I gotta pee!”

Izegbe nodded and Ayaka scrambled down the ladder and out the door. Izegbe took over her stirring duties.

Some time passed then Izegbe waved for Emerald to come by her. She shouted, “I gotta find Ayaka! Keep stirring. Start at this one, stir it shortest, then as the pans get deeper, stir longer then start here again. Keep the juice moving or it’ll burn and we’ll all get in trouble!”

Izegbe winked, glanced up at the surveillance cameras and hurried out after Ayaka.

Emerald kept working, falling into a rhythm of stir short; stir longer; stir longer; stir longest; start again. She’d repeated the cycle twenty times before she finally looked up. She was still alone and outside of the boiling house, the light seemed dimmer. She was also thinking it was time to pour out the shallow pan so it could crystallize.

She turned to stare at the camera and realized she was exhausted – and that she’d been set up by Ayaka and Izegbe. She would be responsible for burning the juice and syrup and great aunt Ruby would hear about it. Then she’d be demoted to children’s school and humiliated.

She straightened up. What did she care? They were all stupid anyway. She hurried to the first pan and set to stirring again, with no idea what to do. She couldn’t just walk away or the sugarcane juice would burn. But there was no way she could lift the pans to pour each batch out by herself, either.

She could call for help. Scream for help, more like. Alternately stirring and running to the door to shriek and then back to the first pan.

But what if no one came?

She didn’t have any friends on SOLAREX.

She hadn’t had any friends back on Earth either except her parents, a couple of workers and some kids in Progresso and Telchac Puerto. That was nothing new. But SOLAREX had left Earth behind. She was going to be with these three thousand people for the next twelve years of her life. She’d survived the past twelve years without friends.

But could she survive the next twelve years without friends?

With an alien machine creature bent on killing her to get at artifacts stored in boxes only she could open?

Digging into the last pan, as it had clearly become syrup, she said firmly, “I don’t need friends!”

Suddenly Izegbe and Ayaka were back, picking up their ladles and stirring the pans. After a moment, Izegbe stepped past Ayaka, slapping her on the shoulder then joined Emerald, nodding down to the ground.

They climbed down; Izegbe took hold of one side of the shallow pan. Ayaka and Emerald – they were both smaller – took the other, and they dumped the syrup into one of three crystallizing pans.

They continued on for another two hours until four pans of thick, dark syrup were cooling on the floor. Izegbe dragged a plastic tarp over them and motioned for the door.

The girls stopped. Izegbe said suddenly, “We were supposed to abandon you.”

Emerald could only nod wearily.

Ayaka shrugged, “But you looked pathetic, so we came back.”

Izegbe frowned, “You ‘think’ you’re supposed to say ‘thank you’? Don’t you know?”

Emerald took a breath and said, “I've been diagnosed with some version of autism. It's just one more," she pointed at each girl, "unique way of being and not a disorder to be cured. In me, I don’t always do well relating with people and may seem distant at times, and angry at others. You may not like it, but it’s who I am, and if we're going to be friends,” she paused, swallowed hard, and added, "It's something you'd have to get used to." She looked at them. Both looked away. She sighed, trudged to the bolus door, slapped it open, stepped in without waiting for Yamata no Orochi, the eight-headed dragon of Japanese mythology, and slapped the door closed.

She could make friends later. Neither one of the girls had run away, screaming in horror. She thought about it a moment, then figured maybe she’d already started.

Guy Stewart is a retired teacher and counselor, with science fiction for young people and adults published in ANALOG Science Fiction and Fact; podcast at CAST OF WONDERS; and in CRICKET the Magazine for Children. For links to his other online works, go to https://faithandsciencefiction.blogspot.com/. For an interview with me about EMERALD OF EARTH, try this: http://www.writersandauthors.info/2015/09/interview-with-guy-stewart.html
Image: https://blogger.googleusercontent.com/img/b/R29vZ2xl/AVvXsEhR0X3mAc2AzqEJWA3ehVkVfHfzWGYFL0TbXeMyJDUyP3fRUi4gVLpK2PSo9qeqvljaCWKP7z9Dn120wRuSmoZoV_CWee_Yaw_UZx39rhg-xjZqsRFAr1ZFk6hZwUbDu0mLyb58RNhTPK9iS5HYXbijVje_dGNSJyz665C6PY0HtZRk-KaQWAsC46CEfQ/s1600/emerald_320.png