The bees were dying again, dropping like the proverbial flies all over the garden and the yard. “Metzger must have gotten some fancy new seeds again,” Emil sighed. It had to be Metzger; Hammond and Anderson down the road were too cheap to keep buying crazy upgrades that grew their own pesticides. Bad enough that the whole neighborhood had to keep upgrading their bees to keep up, not to mention the ridiculous price of brand-name bees.

“We need that Heirloom Protection Act,” Hannah sighed. Without it, Indiana’s right-to-farm laws meant people could plant what they liked, even if it killed the neighbors’ bees.

“Well, until that pig grows wings, I guess I’d better ask Metzger what upgrade to order this time.”

“A whole grand? For bees?” Emil threw down his phone in disgust.

Hannah picked it up and looked at the quote. Indeed, AgriCorp wanted to charge them a thousand dollars to restock their hive with state-of-the-art bees that wouldn’t be killed by Metzger’s new crops. Disgusting.

She handed the phone back to Emil. “Don’t order just yet. I’m going to talk to Hammond.”

An hour later, she came home grinning. “I placed an order with Hammond’s bee guy. They’ll be delivered next Wednesday. Only two hundred, and there’s a money-back guarantee if they die. They’ll be good until Metzger upgrades again.”

Emil folded his arms and looked down his nose. “Don’t tell me you went and ordered some weird bootleg bees.”

“Hammond’s too drunk to notice a problem if it stung him on the ass.” But even Emil couldn't deny that two hundred was a much more reasonable price.

Hannah had to endure Emil’s snarky comments about bootleg bees for the next several days, but the package arrived right on schedule in Wednesday’s mail. “See?” she couldn’t resist saying.

Emil shook his head. “We don’t know how they’ll do.”

That was nothing compared to what he said later that evening when they went to transfer the bees to the hive. “What on Earth are those things?” he demanded.

Hannah could only stare into the open package. It was glowing, and the bees were green.

“I figured this was a mistake,” Emil said, “but I wasn’t expecting weird-ass radioactive glow-bees.”

“I’m sure they’re not radioactive,” Hannah said. “They scan the mail nowadays, because of the terrorists.”

“Those bootleggers probably are terrorists,” Emil grumbled. “Who else would be crazy enough to engineer bees one batch at a time?”

Hannah threw up her hands. “You’re welcome to go borrow a Geiger counter from Anderson, but I’m going to get them into their hive while you do.”

She didn’t want to know what Emil told Anderson, but she was secretly a tiny bit relieved when the machine revealed no radiation. At least she didn’t have to worry about the rest of the neighbors finding out; Anderson was as paranoid about gossip as he was about everything else.

“We’ll call the company in the morning, just to be sure,” she said to placate Emil. “You have to admit, they’re kind of pretty, almost like fireflies without the flash.”

“Those bootleggers aren’t going to give back our money, though,” Emil groused.

“The bees are fine,” Hannah said when she got off the phone. “The lab uses a fluorescent protein as a marker, so they can see that the pesticide resistance genes got engineered-in right. The glow is supposed to turn off, but now and then it doesn’t. It’s harmless, though. They use the same protein in fancy cocktails and Halloween candy sometimes.”

“Told you they wouldn’t give us a refund,” Emil said. But that evening as they sat on the porch, she caught him smiling at the faint green glow showing through the cracks in the hive.

He wasn’t smiling the first time they harvested the honey, though. “No one is going to buy glowing green honey. They’ll think it’s radioactive.”

“Not everything that glows green is radioactive!” Hannah snapped.

“Yeah, but people are stupid.”

She couldn’t argue with that. “We could borrow Anderson’s Geiger counter to show them it isn’t.”

She didn’t really think that would convince anyone, but Emil reached for his phone.

Anderson showed up an hour later. “I want a look at this honey.”

The glow from the honey was visible the moment Emil opened the door to the shed. Anderson whistled. Then he counted the jars. “I’ll take as much as you’re willing to sell,” he said enthusiastically.

“Excuse me?” Emil stared at him.

“It’s perfect. The college kids who buy my weed will love it!”

Anderson didn’t even balk when Emil asked double the usual price. “You have to come up with a new label, though, something really special. Bonus points if it sounds illicit.” 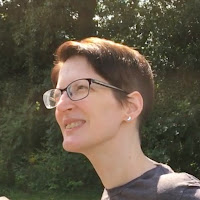 Laura Jane Swanson holds a degree in biochemistry and has done graduate work in molecular biology and science education. She lives in Indiana with her family, where she dreams of the coast and knits lots of socks. She writes science fiction and fantasy.