The bio was just a bright orange marble rolling around in her backpack. I probed it with a finger. It was soft and sticky. I rolled it back and forth, but when I pulled my hand away a pseudopod stuck to my fingertip.

“Ow!” I pulled my hand out and the bio came with it, dangling from my finger like a booger.

“Hey,” Lumi hissed. She pulled the creature loose and tossed it into her backpack, looking quickly around the room. “Watch it!”

She was right; bios weren’t allowed in school.

“It bit me!” I said, examining my purple fingertip.

“Don’t be a baby.” She zipped her backpack shut and slung it over her shoulder. “It was hungry. It’s just a baby. If you come by after school, I’ll show you a full-grown one.”

Lumi’s set-up was much nicer than mine. She had a whole room dedicated to it. My dads made me use a corner of the garage. She had the latest printer, tanks, and ‘riums. Even an incinerator.

“Just a minute,” she yelled, when I knocked on the door. It was covered with bedazzled hazard symbols.

The door flew open and I was looking at a pink hazmat suit with bunny ears.

I backed away and glanced down at my own jeans and t-shirt. “Whoops,” I said. “I didn’t realize we were cooking.”

She twisted her helmet off with a click and smiled at me. “We’re not. I was just moving one to a bigger tank. Come on in!”

As she shimmied out of her suit I turned away, embarrassed even though she was fully clothed underneath. I looked at her row of glowing development tanks. Most of them were empty, but in one floated a curled up little bio something like a cross between a kitten and a snake—but Lumi was much too good to simply mix-&-match. It would probably have eight arms or laser eyes or something. Above the tanks were her ‘riums: her zoo. There were nearly a dozen bios, all of them deadly, most of them pastel. I’d seen most of them before. There was the snarkbite, the aquahop, a pair of gib-gib worms, and my favorite, the fuzzy little cupcake dragon. There were also a few that I hadn’t seen, including a nasty looking spider-base and a mysterious speckled cube that was labeled ‘Matty’s clockshell.’ There was even a funny rocky guy with a wispy beard and wings, though I don’t think even Lumi could cook up a flyer.

“So, did you bring anything?” she asked, tossing her suit over a chair.

I reached into my bag and pulled out a small specimen box. “Just this.”

I upended the box and out tumbled my bio. It was a bright yellow hemisphere ringed with hundreds of little legs. With no visible head or sense organs, it looked a bit like half a grapefruit. Across it were red markings that spelled out the letters H-O-O-B-E-R. “This is Hoober. I made him for Dan. As a Father’s Day present.”

She picked it up and turned it over. Hoober’s little legs went crazy and its sucker tongue stuck out from its central mouth, looking around.

“My spiralsaur could defeat this,” she said.

I put the bio back in its box and dropped the box in my bag. “It was supposed to be ‘Hoover,’ like the vacuum cleaner, but I made a typo.”

She grinned but didn’t laugh at me. Instead, she skipped over to a terrarium and with a pair of tongs picked up a squirming orange blob about the size of a baseball. Carefully, she placed it in a high-walled arena. The blob began to pulse and jiggle. Pseudopods—some short and fat, others long and skinny—grew out of the blob and waved around before being reabsorbed.

“This is my jellyoid,” she announced.

She glared at me. “Yeah, well, it can beat any of your stupid ‘forms!”

I didn’t answer. We both knew she was right. Lumi liked to cook dangerous bios and challenge other dackers. My bios were harmless, useful, or cute. I told people it was because I was pacifist, but Lumi knew it was really because I couldn’t afford the ‘bricks.

“All I’ve got with me is Hoober, and it doesn’t fight.”

“That’s ‘cause it’s stupid.” She stuck out her tongue. “Let’s fight anyway. I promise I won’t let the jellyoid hurt it.” She grabbed my backpack.

I grabbed a strap and tried to snatch my bag back, but she held firm. There was a brief tug-o-war and then my backpack ripped, spilling my stuff all over the floor: my mask, a hand-me-down tablet, and two specimen boxes.

“Hey!” I shouted again. “That bag was brand new.” My dads weren’t going to be happy.

“Oh!” She grabbed the second box before I could stop her. “What’s this?”

“It’s nothing, give it back!” I tried to snatch the box back but she darted away.

“You said you only had one bio.” She held the box up and peered inside. “Hi there, little fella. What’s your name? Want to come out and play?”

She gave me a look. “Of course it’s finished.”

She opened the box and the bio crawled out onto her hand. It was a light blue salamander-base with six stubby legs and pink frills around its neck. There was also a pink valentine heart on its back with the letters L-U-M-I inside. It had beady black eyes and a wide smiling mouth, and when it looked up at her, it trilled softly.

My face was burning up and all I could do was stare at my shoes. 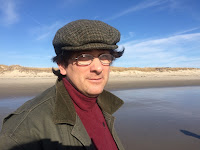 Matthew A.J. Timmins lives in Massachusetts with his wife and like most writers, has far too many cats. His debut novel, The Miseries of Mr. Sparrows, was published in November of 2015. His short stories have appeared in the magazines Betwixt, Stupefying Stories, and Unlikely Story as well as in multiple anthologies.

When not writing he enjoys role-playing games, watching Formula 1 racing, and writing about himself in the third person.
~brb at October 13, 2018
Share