The Odin Chronicles • Episode 17: “A Question of Timelines” • by Travis Burnham 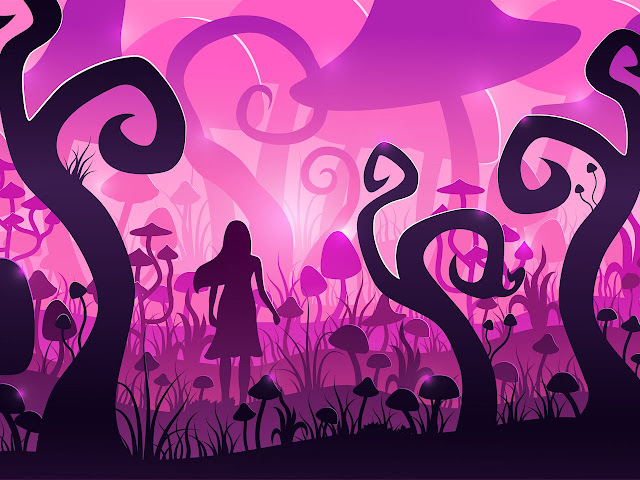 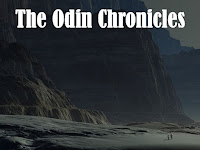 INTRO: Welcome to Odin III, a grubby little mining world on the dark and dusty backside of nowhere. It’s a world where everything that’s worth having is already owned by Galactic Mining, and where people have come to squander their hopes and lives, working for the company and dreaming of striking it big. It’s also a world where some very strange and peculiar things have begun to happen, and it all started about six weeks weeks ago, in a bar called Weber’s Place, when Ray Cornwall didn’t just warp the fabric of space/time, he completely bent it…

In a shady dark corner of the spaceport on Deus IV, Aisling pressed her life savings into the smuggler’s hand. Her hands trembled and a lock of her hair was still streaked with her husband’s blood. He’d died in her arms not thirty minutes before with the bullets of corrupt theocracy agents lodged in his torso. She herself had narrowly escaped.

“Where to?” the smuggler asked Aisling.

She panicked and blurted, “Odin III.” Just the day before, she’d read an article written by a vaguely disreputable scientist about an intriguing species of mushroom, Psilocybe koblyxceata, known as koblyx on Odin III. The scientist had made some outlandish claims and Aisling was surprised that he’d been able to publish the piece. She herself was a therapist by training, focusing on entheogenic mushrooms for the treatment of trauma, or helping relieve existential distress in the terminally ill.

Three weeks later, the smuggler left her at the edge of one of Odin III’s settlements. Constable Jenkins found Aisling stumbling into town, bedraggled and shivering. The constable took one look at her and said, “I don’t care what you’re running from—most of us are running from something out here—just as long as you know that I’m the law, you’ll get on fine .” The Constable looked her up and down one more time and sighed, then scrawled a name on a piece of paper and pressed it into Aisling’s hand with a few credit chips. “Find Father Francis in town. He’ll set you right.”

So with a helping hand from the local parish, Aisling did the only thing she knew how to do—be a therapist. She set aside her trauma to help others work through theirs. Most of her first clients were children—it was tough growing up in a Galactic Mining settlement. One of the three local teachers, Finn, directed his students her way.

One morning, after she’d been on Odin III for four-and-a-half months, Finn asked, “Grab a cup of coffee?” He was attractive, tall and lean, and had a solid, quiet demeanor she found comforting.

“Thank you, but no, Finn.” She still felt raw from her husband’s death. She might have tried entheogenic therapy earlier, but she knew that Father Francis would denounce the mushroom’s use. There would be severe repercussions. She didn’t want a repeat of Deus IV, and though the Father hadn’t explicitly attached strings to the charity Aisling had received, she really didn’t want to disappoint him—he’d been so kind. But she knew it was time to start working on her own trauma and she knew this type of therapy to be effective. So she lay on her living room couch, slipped on some headphones playing Arvo Part, and took a dose of koblyx mushrooms.

Psilocybe koblyxceata was like no other experience she’d had. A thousand, a million chords of light spilled out from her. She plucked at one chord and saw an alternate life—she was six months pregnant with her husband’s child, both of them safe on Zephyrus II. In other chords, the smugglers jettisoned her body soon after takeoff from Deus IV or she died on Odin II in a mine collapse or a hundred other fates. Though Aisling had no inkling why, no one else she knew was able to see timelines while using koblyx. So she kept her own counsel and told no one. Especially because she wasn’t even sure she could trust her visions. Were they truly timelines or just her own imagined visions? She’d been soundly in the non-believer camp when she’d first heard the koblyx whispers and rumors.

But then she’d used them.

A few weeks later, Finn asked her out again, “I don’t suppose you’d be interested in a mug of Earl Gray?”

“Maybe next time,” she said, but didn’t mean it.

Soon she was spending every night on her couch, plucking at timelines, examining every decision that had led her to Odin III. All those terrible choices that had led to her husband’s death on Deus IV. But at the same time, she used information she gathered to help her in her practice. The kids she guided to actions that would benefit them—in one timeline, befriending a bully worked, but in others standing up to them was best. Or competing timelines where asking out a certain someone would lead to an affirming relationship, or a bitter rebuff.

Her first adult patient was Daraja Mapunda, otherwise known as The Machinist. A wizard with worm drives and gear boxes, he was a recluse who lived down in the mines of Odin III. Aisling met him in one of the abandoned shafts on one of her koblyx gathering missions. When she mentioned her occupation, he expressed some interest and appeared at her office one evening.

“I feel like I could have done more to save my father,” he said. “But instead I just sent him away. And he died of esophageal cancer while traveling to Asclepius II for treatment.”

That night Aisling plucked dozens and dozens of Daraja and his father’s timelines. There was nothing Daraja could have done differently that would have resulted in a better outcome and the next session she helped Daraja see that.

“Did you tell him you loved him?” Aisling asked during their next session.

“Everyday,” Daraja replied. “More than once a day. In every single message. Even the short messages that were just a chess move ended with ‘I love you’.”

“What was the last thing he wrote to you?”

“That he loved me, and that he was proud of me.”

“And the last thing from you to him.”

“If I was writing your story as a movie script, I can’t think of a more perfect line of dialogue.”

Daraja smiled through his tears. And after that he still struggled, but Aisling could tell that his heart was lighter, even if just by a bit.

The more Aisling examined her own timelines, the more she agonized over every past misstep, and more and more, found herself paralyzed with indecisiveness in her present. She didn’t want to go to the store because that evening she’d see all the thousands of timelines that action produced, good, bad, and better.

Though for some reason she couldn’t even explain to herself, she never looked at the timelines with Finn.

And Finn continued to ask her out every few weeks, but changed the drink every time, the options getting more and more ludicrous—giraffe milk frappes or seaweed beer or any number of other horrid sounding drinks. Her answers continued to be no.

Finally, she realized her timeline examinations weren’t healing her trauma, but worsening it. Painfully, bit by bit, she weaned herself from scrutinizing her own timelines, and focused on those timelines that would help find good courses of action for those in her care. And she found some modicum of relief from indecision, and acceptance that her husband was gone.

The AI android Sloane-51 came to her struggling with existential angst. She’d been referred to Aisling by her close friend, Daraja. Aisling examined her timeline and found that some of the best timelines came from when the android just kept on keeping on.

“Should I be doing something more with my sentience?” Sloane-51 asked.

Aisling replied with a question: “What do you do with it now?”

“I play a lot of chess with Daraja.”

“Does it bring you joy?”

“I can’t think of a better use for your gift. There can’t be too much joy in the world.”

That evening, Aisling reflected back on what she’d said to her clients—maybe she should take her own advice. One last time, she promised herself, she examined her own timelines. It was impossible to live without choice or consequence, but it was possible to live a life where she embraced her decisions.

Eleven months to the day after she’d arrived on Odin III, Finn stood before her. He kicked at a stone in the dirt, and the twin sunset was reflected in his dark green eyes, and limned his black hair gold.

“Aisling, do you want to get—”

It was perhaps the fifteenth or twentieth or hundredth time that Finn had asked her out. He certainly scored points for persistence.

“How about some coffee?” she interrupted.

Coffee didn’t have to be a decision that led to one million timelines, and it probably wouldn’t lead to someone dying. Sometimes, hopefully, coffee could just be coffee.

“Though maybe after the coffee?” She put on a straight face and tried not to laugh. “We can grab a couple shots of Jörmungandr viper venom at Weber’s Place.”

Travis Burnham’s work has found homes in Far Fetched Fables, Hypnos Magazine, Bad Dreams Entertainment, South85 Journal, SQ Quarterly, and others. He is a member of the online writers’ group, Codex, and has an MFA in Creative Writing from Converse College. He also recently won the Wyrm’s Gauntlet online writing contest. Burnham has been a DJ on three continents, and teaches middle school science and college level composition. He lives in Lisbon, Portugal with his wife, but grew up in Massachusetts, is from Maine at heart, and has lived in Japan, Colombia, and the Northern Mariana Islands.


In the meantime, stay tuned for Part 18 of The Odin Chronicles, “Memory Vault,” by Gustavo Bondoni, coming next Wednesday. 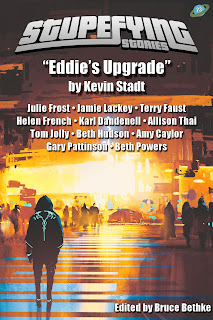